Finding peace with the sun 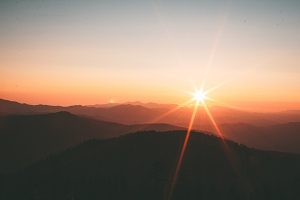 When his new barber got too popular, Seattle patient Russ tried trimming his own hair back at home. That’s when he noticed a new spot on the back of his neck.

“My first thought was to shrug it off,” says Russ. “But after thinking it over, I took out my cellphone and snapped a photo to send to the doctor.”

It’s a good thing he did. Soon after delivering the photo, he was asked to come in for a series of appointments, which led to a diagnosis: melanoma.

“I went through some initial scary moments when I saw the report, but the doctor was able to explain it was just stage zero,” says Russ. Having caught the skin cancer early, treatment was simple and complete within weeks, and now he wears sunscreen daily.

Many Northwest residents flock outside in April to soak in the vitamin D as soon as the sun appears. Our many cloudy days can make the sun feel like an old forgotten friend, bringing mixed feelings when it reappears. It can help us feel better—and take better care of ourselves—to remember the sun shines through all the time, even when we don’t see it.

“It’s obvious you need to wear sunglasses when the sun is intense,” says Tony Huynh, MD, an ophthalmologist at PacMed’s Canyon Park and First Hill clinics. “But it’s important to protect your eyes year-round, even when it’s cloudy. Those damaging rays can still get through the clouds.”

One sign of the Seattle area’s mixed relationship with the sun is our high rate of sunglasses purchases—50% higher per capita than the national average by one measure, possibly because we forget where our shades are stored over long cloudy periods.

If you forgot where your last pair of sunglasses was stored, it’s good to pick up a new pair, according to Dr. Huynh: “Your eyes can get sunburned, just like the rest of your skin, which can be painful. But without protecting your eyes, the damage can be much worse, ranging from abnormal growths to cataracts to macular degeneration.”

Dr. Huynh emphasizes the importance of choosing wraparound sunglasses with 100% UV protection. He also recommends brown and orange-amber tints, which are better than gray or blue tints at blocking the low-wavelength light that can cause serious damage over time.

While Russ had a close call with melanoma, the wake-up call helped him improve his relationship with the sun. “I’m a rower, and a lot of times I’d get on the water and realize I forgot the sunscreen. Now I know which sunscreen is best, and stocked up on the zinc oxide and a few hats. I definitely feel more empowered now going out in the sun.”

Tony Huynh, MD, practices ophthalmology at our Canyon Park (Bothell) and First Hill clinics. Learn more about him at our website, or call 206.329.3937 to schedule an appointment.